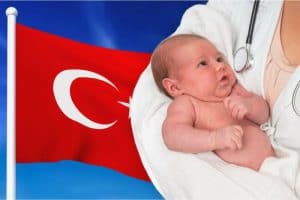 Whether you are in Turkish or not, Turkish names for girls can be lovely. So if you are looking for ideas, look at these Turkish girl names for your baby.

We have compiled a list of the 25 best Turkish girl names for your baby. We’ve also added some interesting information about these names.

Best Turkish Names for A Girl

Afet is a very popular Turkish name for both girls and boys. It has several meanings, including “attractive,” “forgiving,” and “lovable.”

It’s an excellent name for a cheerful and energetic young girl. In some areas in Turkey, it can also translate to “catastrophically beautiful woman.” Some people also say that it means “femme fatale.”

Aisha is an extremely popular name within and outside Turkey. This is because Aisha was the youngest wife of Prophet Muhammad.

There are alternative spellings, including Aishat, A’isha, and Aicha. Loosely translated, this name means “womanly” or “she who lives.”

Ajda is an interesting Turkish name for baby girls that loosely translates to “returning visitor.” It is interesting to note that this is the Slovenian word for buckwheat. One famous example is Ajda Pekkan, a Turkish pop music superstar.

This is a beautiful Turkish name for young babies. It means either “genuine” or “real.” In fact, this is a name that can also be used for boys.

When it is used for boys, it means “rightful,” “truthful,” or “authentic,” especially when the Hindi translation is considered. Asli ve Kerem is a Turkish love story similar to Romeo and Juliet, with Asli being the protagonist.

This is one of the most popular Turkish names for girls. Loosely translated, this name means a “girl whose face is as beautiful as the moon.”

This is also a very popular name for Christian and Muslim girls. One famous example is Aysun Kayaci, a Turkish model who starred in a 2007 Pepsi commercial.

This is a fashionable Turkish name with origins in Arabic and Hebrew. Loosely translated, it means “precious” or “beloved.”

This name also has origins in African languages, where it can mean “magnificent,” “gorgeous,” or “glorious.” In Swahili, this name also loosely translates to “valuable.”

Bahar is a common name for Turkish girls that loosely translates to “season of spring.” It may also come from the Arabic word Baharat, which means “spice.”

A variation of this name is Bahir, a boy’s name that means “brilliant” or “superb.” An example of a famous Bahar is Bahar Kizil, a German singer of Turkish descent.

The name Banu has both Indian and Turkish origins and many meanings, including “princess,” “little sister,” and “bride.”

This is an extremely popular name in many countries, including Sri Lanka, India, Bangladesh, Iran, Azerbaijan, and Turkey.

In Hindi, this word loosely translates to “sun.” Interestingly, this name can be used as a surname, first name, or middle name. One famous example is Saira Banu, an Indian actress.

Belkis is a typical Turkish name for girls that has Arabic origins. In Arabic, the name means either “princess” or “queen.” In fact, there is a small town in Turkey named Belkis.

Moreover, the first Turkish woman to fly an airplane was Belkis Sevket Hanim. In the Hebrew Bible, Belkis was also the queen of Sheba.

Beren is an all-time popular Turkish name for girls. It has a variety of meanings, including “strong,” “well known,” and “clever.”

One example is Beret Saat, a Turkish actress who won two Golden Butterfly Awards. In addition, she has starred in a Netflix original series called “The Gift.”

In the critically acclaimed “Lord of the Rings,” this word means “brave” in the language of the grey elves.

This highly popular Turkish name for girls is a word that has many meanings, including “bride,” “wise,” “old person,” and “queen.”

There is also an epic Turkish story where Bike loosely translates to the “dragon with seven heads.” This name has several variations, including Aybike, Isenbike, Aybuke, etc.

This is a very interesting Turkish name for girls that loosely translates to “fragrance” or “scent.” It may also mean “redolence.” This is also a word that is often used to describe the smell of rain. One example of a famous Burcu is Burcu Dag, a Turkish para-archer.

This name is related to the way water flows down a waterfall. This beautiful Turkish girl’s name translates to “filled with life and energy,” “timeless,” and “flowing water.”

This is also a word used for a popular Turkish delicacy made of green almonds. A famous Cagla is Cagla Demirsal, a Turkish ice dancer who has won multiple championships.

This beautiful name translates loosely to “she who flows like water.” This is also a name that has African origins, where it loosely translates to “successful lady.” However, the Arabic meaning of this name is “beloved.”

This interesting Turkish name for girls and young women is related to the changing of seasons. Specifically, it relates to winter turning into spring. As a woman’s name, it may mean “burning ember.”

According to Turkish mythology, when the winter turns to spring, three embers will fall to the earth to warm up the ground. Cemre Fere is a famous Turkish badminton player who has won 16 titles throughout her career.

This is a Turkish name with Arabic origins, and it can translate to “drop by drop,” “drizzle,” “water droplets,” “drop of water,” or “dewdrop.”

This name, interestingly enough, is widespread in Denmark, Norway, and Sweden. Moreover, it is a name used by Christians and Muslims alike. A notable Damla is Damla Gunay, a Turkish archer.

Initially, this was a boy’s name, although it has also become prevalent for girls.

In Turkish, this name translates loosely to the “sea.” It is also closely related to the Greek name Dennis, which could mean a follower of Dionysius. Deniz Orhun is a world-famous Turkish chef.

This popular Turkish girl’s name is often used in Arabic and Armenian cultures and has even become popular in America.

This name can have several meanings, including “adamant,” “willful,” “stubborn,” and “diamond.” It has its origins in the Arabic word “almas,” which directly translates as “diamond.”

This is another Turkish with origins in Arabic. In Turkish, it means “wish” or “desire.” In Arabic, it means “inspiration” or “hope.”

It also has Hebrew meanings, including “hard-working” and “labor.” One example is Emel Mathlouthi, a famous Tunisian singer.

This Turkish name is most often used for girls, although it can also be used for boys. The name loosely translates to “action.”

It is interesting to note that this name is very popular in Turkey and France. Eylem Elif Mavis is famous for having climbed Mount Everest.

Feriha Is another popular Turkish name for girls, which translates to “merry woman.” This name also has origins in Urdu, where it means “cheerful,” “joyful,” or “happy.” Three Turkish actresses share this name.

This classically Turkish woman’s name translates to the “dimple” on the cheek when a person smiles.

Although it is predominantly a name for women, it is also used for boys. Many Turkish actresses and sports players share this name.

This name is very popular in Central and South Asia and throughout Arabia. This name loosely translates to “beautiful,” “excellent,” or “wonderful.”

In some areas, this name is believed to have Hindi or Indian origins, as it is said to represent the goddess Parvati.

This is one of the most popular Turkish names for girls. It loosely translates to “valuable.”