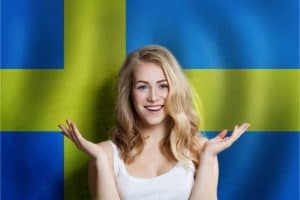 Whether you are Swedish or not, Swedish names can be pretty cool. So if you are expecting a baby girl, check out these 28 popular Swedish girl names and what they mean.

We have compiled a list of the top 28 Swedish girl names and included some fun facts.

The name Astrid is of Scandinavian origin. Astrid may also be spelled as Astride. This name translates to “divinely beautiful.” One famous Astrid is Astrid Lindgren, the Swedish woman who wrote Pippi Longstocking.

“Agnes” has Greek origins, meaning “pure” or “purity.” Agnes may also be spelled as Agnija, Agatha, or Aggie.

Although not overly popular among today’s younger generations, it was once highly so. One example of a famous Agnes is Agnes of Rome, the patron saint of young girls. Unfortunately, she was martyred in the year 304 BCE.

Alma is another famous Swedish name with Latin origins. Its meaning is “soul” and “nurturing.” In 2020, the name Alma ranked No. 567 among the most popular names in the US. An example of a famous alma is Alma Mahler, a Viennese voice and piano composer.

This popular Swedish girl’s name has origins in Russia and Sweden. Its meaning changes depending on where you are. It can mean “purity” and “grace.” A famous example is Swedish golf champion, Annika Sörenstam.

Clara is another popular Swedish girl’s name; it can also be spelled “Klara.” This name has Latin origins and translates to “brilliant.”

Ebba is a Scandinavian name, which some would also consider an old German name. This name has its origins in the word Eberhard, which loosely translates to “strong” in German.

The name Elsa has German origins, and it loosely translates to “pledged to God.” This name may also be spelled “Elsie” or “Elisabeth.” One famous Elsa is Elsa Andersson, the first female Swedish pilot, and parachutist.

Elvira is a popular Swedish girl’s name with has Spanish origins; it loosely translated to “fair” or “white.” One example of a famous Elvira is German Olympian Elvira Possekel.

Although not overly popular in the international community, Elvira did come in at No. 51 among the most popular girls’ names in Sweden.

This is yet another popular Swedish name with German origins. This is one of the most popular names and currently ranks as the US’ No. 2 girl’s name.

Emma loosely translates to “universal” and may also be spelled as Ema, Emmie, or Emily. Many famous examples include Emma Watson of the “Harry Potter” series and Emma Stone.

Filippa is the female version of Filip, both very popular Swedish names. It loosely translates to “friend of horses.”

Freja is extremely popular when it comes to old Norse or Nordic names. It loosely translates to “lady” and may also be spelled Freyja.

Of course, Freya was the Norse goddess of beauty, love, and fertility. Freja ranked No. 958 in the US in 2020, while the name is in the top 10 girls’ names in Sweden.

Although it may sound a bit harsh, the meaning of this name is “calm” or “peaceful.” However, today, the shorter version of Frida is a bit more popular.

Greta is a trendy name in Sweden, while the name does have German origins. It loosely translates to “pearl.”

Although not overly popular anymore, it was prevalent during the first half of the twentieth century. One example of a famous Greta of our time is Greta Thunberg, a young environmental activist from Sweden.

Gunnel, another Swedish name, loosely translates to “battle maiden.” This name has its origins in old Norse culture. At one time, it had great popularity. However, it’s lost popularity over the years.

Jolanda or Yolanda is primarily a name of Slavic origin that means “violet flower.” It is classically a Swedish name.

Juni is yet another popular Swedish and Finnish girl’s name. It refers to that warm and beautiful summer month. Juni is often said to have several meanings, including “youth,” “desirability,” and “light.”

One of the most common names for women in Sweden is Klara. This name loosely translates to “bright” or “clear.”

Leah does have Hebrew origins but is also a popular Swedish name. The name means “weary.” Internationally, Leah is one of the most popular girls’ names at this time. Leah was the wife of Jacob in the Old Testament.

Lilly is one of the most popular Swedish names among the global community. In 2020, in the US, it ranked at No. 231.

The name “Lilly” has Latin origins and is, of course, a flower. It may also mean “rebirth,” “pure,” and “passion.” Alternate spellings include Lily, Lillie, Lilion, and Lillian. Some famous examples include Lily Collins and Lilly Pulitzer.

Linea is another popular Swedish girl’s name, although admittedly not as popular as others on our list.

This is a genuinely Swedish name and may also be spelled “Linnaeus” or “Linnean.” This name loosely translates to “twinflower” or “lime tree.”

Lovisa, as a name, may have British origins but is very popular in Sweden. It is No. 57 among the most popular girls’ names in Sweden.

An alternate spelling is Lova, which ranks No. 37 in Sweden. A famous example is Lovisa Augusti, a Swedish Royal Academy of Music member during the 18th century. Loosely translated, this name means “renowned warrior.”

Although not as much in the US, Maja is a popular name in Sweden. Fun fact: Maja Einstein was the younger sister of Albert Einstein. This name is said to have origins in Arabic, Scandinavian, and German and loosely translates to “splendid.”

The name Matilda has German origins, although it is very popular in Sweden. In 2020, Matilda ranked No. 478 among the US’s most popular girls’ names.

A good example is Matilda Wormwood, the main character of the book Matilda, written by Roald Dahl. This name may also be shortened to “Tilda,” meaning “battle mighty.”

Nova has regained popularity as a girl’s name, both in Sweden and the US. It actually ranked in the top 100 girls’ names in the US. Although it does have Latin origins, it is often considered Swedish. Nova, in Latin, means “new.”

Tuva is a truly 100% Swedish name that loosely translates to “tuft of grass.” A popular variation of this name is Tove. In 2020, this name ranked No. 62 and No. 34 in Norway in Sweden. Therefore, it is a very popular Scandinavian name. A famous example is Tove Edfelt, a Swedish actress.

Ulla is a Scandinavian and German name that translates to “determination.” It is still a prevalent name in Sweden.

Vera as a name has both Russian and Swedish origins. The meaning of Vera, roughly, is “faith.” It may also be spelled as Viera. Two famous examples include Vera Lynn and Vera Wang. In the US, in 2020, Vera ranked in the top 250 girls’ names.

Wilma has both German and Swedish origins. Its loose meaning is “resolute protection.” This name may also be spelled as Wilhelmina, which is, of course, more German. At this time, Wilma is in the top 100 girls’ names in the US and among the top 10 in Sweden.