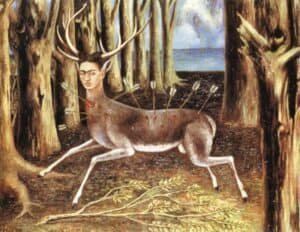 Throughout history, people have turned to art to express the whole range of human emotions. While the world’s most famous paintings may often create feelings of joy and triumph, many famous paintings also deal with emotions of sadness, grief, and loneliness.

Here are the world’s most famous sad paintings ever created.

The 10 Most Famous Sad Paintings

First on our list of famous sad paintings ever created is “Christina’s World” by Andrew Wyeth. Wyeth (1917-2009) was an American realist painter working predominantly in the regionalist style. Wyeth was a self-taught painter who only received formal education from his father, artist, and illustrator N. C. Wyeth.

Wyeth’s career spanned over seventy years. He became one of the most recognized artists of his time, and “Christina’s World” is his most famous painting.

It depicts Wyeth’s neighbor, Anna Christina Olson, who had a degenerative disorder that rendered her unable to walk. Wyeth’s painting magnifies the isolation of the composition, emphasizing how far she is from home and family and the challenging journey that lies ahead of her.

Number two on our sad famous paintings list is “Stańczyk” by Jan Matejko (1838-1893). Matejko is arguably the most celebrated Polish painter of all time. He is most famous for large-scale paintings depicting significant events in Polish history. He studied at the Krakow Academy of Fine Arts and eventually became director of the institution, which was renamed after him in 1979.

The full English title of this painting is “Stańczyk during a ball at the court of Queen Bona in the face of the loss of Smolensk.” It depicts Stańczyk, the court jester, sitting alone in deep, gloomy thoughts while a prosperous and joyous celebration is happening behind him.

He appears to have read the letter on the table, cast aside his jester’s props and trinkets, and sunk down in sadness and mourning for the lost Battle of Orsha. The painting is perhaps rendered sadder by knowing that Matejko used his own face as a model.

Third on our sad paintings by famous artists list is “Melancholy” by Edvard Munch (1863-1944). The Norwegian expressionist artist is known for works that are sad and unsettling. His most famous painting, “The Scream”, is a famous depiction of grief and horror.

Munch’s early life was plagued with physical and mental illnesses, and the events of WWI and WWII deeply affected him.

“Melancholy” depicts a young man looking into the distance, contemplating a romantic breakup. The landscape of Asgardstrand beach behind him reflects his vague thoughts in deep, unhappy colors.

Munch painted this subject six times between 1891 and 1896, demonstrating different aspects of grief and sadness each time.

4. The Wounded Deer by Frida Kahlo

Frida Kahlo (1907-1954) is one of Mexico’s best-known artists who used a folk art style that mixed reality and fantasy with challenging questions of politics and identity.

Famous for her self-portraits, Kahlo was disabled by polio and suffered chronic pain, which was often a subject of her work.

In “The Wounded Deer”, Kahlo depicts herself as a human-animal hybrid. A deer with her face appears to be standing mid-step in the center of the painting, surrounded by trees and foliage.

The deer is wounded by nine arrows, and lightning descends from the blue sky in the background. The deer’s face is sad but calm, as though accustomed to the pain.

5. The Old Guitarist by Pablo Picasso

Pablo Picasso (1881-1973) is one of the most famous painters in the world. During his long career, he pioneered many different art styles and movements.

For example, during his “Blue Period” (1901-1904), he created art that was literally colored by grief, painting grim and unhappy subjects in gloomy shades of blue and teal.

“The Old Guitarist” is one of Picasso’s most famous Blue Period paintings. It depicts a thin, blind street musician on the streets of Barcelona, his body painfully angled around the canvas while his head hangs low.

At the time, Picasso himself was a poor and struggling artist, and it is thought that this painting reflects his own predicament.

Ivan Nikolaevich Kramskoi (1837-1887) was a Russian realist painter and art critic. Kramskoi was controversial for painting religious subjects in a humanist tradition, portraying biblical figures as people with complex moral and psychological dynamics.

Inconsolable Grief is a profoundly personal painting. Kramskoi lost two of his young sons in four short years and painted a portrait of his wife in mourning.

In the painting, she stands beside a funeral table loaded with flowers, a handkerchief pressed to her face. Her eyes are dark, exhausted, and inexpressibly sad.

Kramskoi’s painting expressed his own grief and mourning, and he realized that it may not be a work of art suitable to decorate a home. So he gave it to a friend, suggesting they hang it facing the wall.

Dutch painter Vincent van Gogh (1853-1890) famously struggled with depression and mental illness and is known for paintings that express sadness and loneliness. His Post-Impressionist style used vivid colors and bold brushstrokes that would come to characterize the Modern Art movement after his death.

Vincent van Gogh’s painting “Sorrowing Old Man (At Eternity’s Gate)” is considered to be a self-portrait of the artist and is believed to represent his own spiritual struggle.

The painting depicts an elderly man in a dark robe with his face downcast and hands clasped in prayer, suggesting a sense of deep despair. The painting has been interpreted as a representation of van Gogh’s own feelings of isolation and spiritual anguish.

Frederic Lord Leighton (1830-1896) remains one of England’s most celebrated artists and achieved widespread recognition during his lifetime. He was the first English painter to be made a baron and elevated to the peerage. And because of his fame, success, and role in the Royal Academy, he influenced generations of painters.

In “Lachrymae”, which means “tears”, the painting perfectly captures tears and sadness. Leighton’s Neoclassical style depicts a woman in black leaning against a column, resting her head on her arm.

Around her are all the trappings of a funeral, including cypress trees, a dried wreath, fallen leaves, and the setting sun.

Paul Cézanne (1839-1906) is one of the most influential French painters in history, as a pioneer in Post-Impressionist and Expressionist art with an interest in optics that opened the door to Cubism.

While his work was often criticized and even ridiculed in his day, his understanding of color, structure, and form influenced a generation of European painters.

His painting, “Sorrow”, explores his personal feelings of loss and failure. A male figure dominates the canvas, resting his head on his hands in a dimly lit room.

Beneath the figure, a stylized skull indicates grief and sorrow. The dark colors and deep shadows are full of mourning. However, there is also a softness in the clothing and an almost restful look on the face that suggests that sorrow is not the end.

10. The Sad Message by Peter Fendi

Last on our list of the most famous sad paintings ever created is “The Sad Message” by Peter Fendi. Austrian painter Peter Fendi (1796-1842) was a leading artist of the Biedermeier period. The period was when fine art became more accessible to the middle class, and artists turned to daily life as their subject matter.

Disabled in childhood, Fendi worked as an engraver and an art instructor and pioneered new lithography methods.

His most famous painting was “The Sad Message”, representing an early breakthrough in genre painting.

In the painting, a woman is seen with an infant and a fallen letter on her lap while a child stands behind her. Leaning over her is a soldier, returning her dead husband’s belongings.

In this image, we can see that the woman is already struggling; the home is small and cluttered, a bit messy, and there is a pile of mending beside her. We can’t see her face, but we see and feel her grief and sorrow.

Art connects us all in a way that allows us to feel emotions and experiences that we may not be able to express ourselves. These paintings are a testament to the power of art to evoke strong emotions and the fact that pain, sorrow, and sadness can still be expressed in beautiful and compelling ways.

These works of art continue to be felt to this day, reminding us of the power of art to bring us together, share in our emotions, and show us that sorrow can be remembered and respected.

We hope you enjoyed our list of the most famous sad paintings ever created. Which one is your favorite? Let us know by sharing this on social media and commenting on your favorite.

Don’t forget to check out our top 20 self-portraits by famous artists here too!