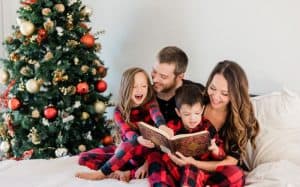 The holiday season is upon us, and what better way to get into the festive spirit than by learning some fun facts about Christmas? Here are 10 of the most interesting tidbits about this special time of year.

Since we were kids, we’ve all been familiar with Rudolph and his iconic red nose. But it’s interesting to note that the lovable reindeer was almost named Reginald by copywriter Robert L. May.

May created the quirky character in 1939 for some Montgomery Ward coloring books. Before settling on Rudolph, the writer thought to name him Reginald or Rollo.

And initially, Rudolph’s nose wasn’t going to be red since a red nose was considered a sign of alcoholism back then, and publishers Montgomery Ward didn’t want Rudolph to be presented as a drunk!

2. Santa Claus Riding In A Sleigh Was Washington Irving’s Idea

In case you don’t know who Washington Irving is, he was a famous American author in the early 19th century, best known for his famous gothic tales, “The Legend of Sleepy Hollow” and “Rip Van Winkle”.

But despite his eerie writing style, he was also the genius behind the idea of Santa’s famous flying sleigh.

In The Sketchbook of Geoffrey Crayon, a series of short stories published by Irving in 1819, the author recalls a dream of Santa flying across the sky in a wagon. The wagon is filled with toys and goodies for all the good children of the world, and Santa is flying across the sky, scattering gifts as he goes.

Next on our list of Christmas fun facts is about “Rent-a-Santa”. Businesses across the US are always looking to hire Santas during this time of year. As a result, more than 20,000 people are hired each year to work as a “Rent-a-Santa”.

There are roughly 20,000 ‘Rent-a-Santas’ across the United States annually as businesses across the US are always looking to hire Santas during this time of year.

They undergo rigorous training to stay cheerful and professional in public. They’re taught to not take money from parents while children around. They’re also taught to avoid garlic, onions, or beans in their meals for obvious reasons!

4. All I Want For Christmas Is… A Decent Night’s Sleep

A recent poll of 2,000 American adults revealed that during the winter holiday season, 62% of them find this is their most hectic time of year. Of those surveyed, 66% said that if they could, they would ask Santa for a product that could aid in improving their sleep. We got his phone number here if you want to try your luck!

Reasons for lack of sleep during the holidays include cooking and preparing meals, shopping stress, financial stress, and having family over.

Many respondents also noted that they stay up later to attend holiday parties or events, finish wrapping gifts, or to clean up.

5. The Most Popular Christmas Song Ever Is Silent Night

Next on our list of fun facts about Christmas is Silent Night. The legacy of Joseph Mohr and Franz Xaver Gruber, who wrote the lyrics and music, respectively, for the beloved Christmas carol, lives on in the form of it being the most popular Christmas song of all time.

The beautiful carol originated in Oberndorf bei Salzburg, a small town in Austria. It was first written in German in 1816, and the music was composed in 1818. It was first recorded in 1905, and since then, the song has enjoyed ongoing popularity, featuring in movies, multiple successful recordings, and being referenced by other musical compositions.

According to the Guinness World Records, the largest human Christmas tree was created by 4,030 schoolchildren in December 2015. It was made in the village of Chengannur in Kerala, India.

The children were dressed in green, red, and brown costumes and formed a giant tree shape, while they sang Christmas carols and other songs. The event was part of a community celebration, with nearby residents and local officials in attendance.

The Guinness World Records credited the event for bringing the community together and inspiring local children.

7. The Office Is The Most-Watched TV Show During Christmastime In The U.S.

The Office is the most-watched and most-searched show in 27 states in the US during the holiday season and is number 7 on our list of fun facts about Christmas. In case you’ve been living under a rock, The Office is an American mockumentary sitcom depicting employees’ daily work lives at the Scranton, Pennsylvania branch of the Dunder Mifflin Paper Company.

The show has been lauded for its characters, witty dialogue, and eccentric humor. It has also been praised for its clever use of pop culture references and for the cast’s comedic timing. As a result, the show has gained a cult following and is often referred to as one of the best and funniest television shows of all time.

Don’t forget to check out our most persuasive TV ads of all time post too!

8. The Tradition Of Leaving Milk And Cookies For Santa Linked To Norse Mythology

It’s widely accepted that the tradition of leaving milk and cookies for Santa originates from Norse mythology. According to myth, people would offer hay and other treats for Odin’s eight-legged horse, Sleipner, hoping that the god of war and death would visit their home during his Yule hunting adventures. This practice was passed down to Dutch children, who would leave treats for Father Christmas’ horse (not reindeer).

Eventually, the tradition changed to leaving treats for Santa himself. Today, leaving milk and cookies for Santa is a fun holiday tradition that many families enjoy. It’s a way to show Santa how much we appreciate his hard work and give our children a chance to be a part of the Christmas magic.

Christmas was first celebrated on December 25th in 336 AD, during the reign of the Roman Emperor Constantine, the first Christian Roman Emperor. However, it was not until the 9th century that Christmas became a major Christian festival.

As Christianity spread and grew, so did Christmas celebrations. By the Middle Ages, Christmas had become a major holiday in Europe, with feasts, parties, and special church services. People also began to exchange gifts, decorate their homes with evergreen trees and wreaths, and enjoy festive music and caroling.

In the 16th century, Christmas began to be celebrated worldwide in the Americas and elsewhere.

10. The Grinch Is The Highest-Grossing Christmas Film Of All Time

The 2018 release of The Grinch was a massive hit grossing more than $512 million, and is the highest-grossing Christmas film to date.

While critics noted some differences from the original tale, the visuals and festive feel were praised. Even with a few mixed reviews, there’s no denying the success of this movie.

We hope you enjoyed our top 10 fun facts about Christmas. From the origins of the holiday to the fun traditions that have been celebrated for centuries around the world, Christmas is a time of joy that brings people together in celebration. So whether you’re looking to learn more about the holiday or just want to enjoy some fun facts, this article has something for everyone. Merry Christmas!