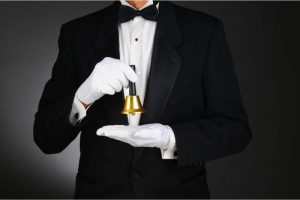 You’ve come to the right place if you’re planning on getting a butler but have no idea what to call him. Sure, calling a butler Jeeves is common, but not all that creative. We want to look at various trendy butler names that you might know from pop culture.

First, let’s look at the 12 most popular butler names you might recognize from famous television series and movies from the past few decades.

One of the seemingly most popular names for butlers is Alfred. A famous Alfred from pop culture is none other than Alfred Pennyworth, the butler to the Wayne family in the “Batman” cartoons, television shows, and movies.

Alfred Pennyworth is well-known for being an aide to Batman as the voice of reason. The name Alfred has English origins.

In old English, it translates to “elf” and “raed” (counsel) and is usually thought to mean wise. Based on the advice Alfred gave Bruce Wayne over the years, the name seems to be quite fitting.

Reginald Jeeves is another well-known and popular butler name from pop culture. Although he was technically a valet, Reginald Jeeves also performed butler services. He is the fictional valet in the short stories of P.G. Wodehouse.

Jeeves’ job involved ensuring that his master, Bertie Wooster, stayed alive, as Bertie wasn’t the most intelligent of employers. Reginald as a name also comes from old English, which means “counsel” and “rule.”

Aptly named Geoffrey Butler, this was the butler on the much-beloved 90s sitcom “Fresh Prince of Bel-Air.” This wise-cracking butler always took care of sticky situations while adding humor to the mix.

“Geoffrey” has Germanic origins and means “God’s peace” or “divine peace.” It’s an interesting name for this particular character, seeing as there was never a moment of peace in the Banks household.

Before the modern take on “The Avengers” series, Tony Stark did not have a robotic or artificial intelligence butler. In fact, his butler was a real person—Edwin Jarvis. Jarvis’ job was to take care of The Avengers’ mansion and the needs of the Avengers team.

He is often regarded as one of the most dedicated butlers of all time due to his propensity to be kidnapped and bound by villains while still executing his duties. The name Edwin is English, where it means “prosperity,” “fortune,” and “friend.”

He posed as a butler but always did an excellent job performing his duties. Lynn Belvedere is often regarded as another of the most sarcastic television and movie butlers. The name Lynn also has English origins, where it can have several meanings, including “waterfall,” “lake,” “pond,” or “pool.”

Charles Carson is the much-beloved butler from the critically acclaimed television series “Downton Abbey.” Carson is in charge of the daily workings of the Abbey, more and less in all regards.

Carson did his job and took pride in his work. The name Charles also has English origins, where it is taken to mean “free man.” But, of course, labeling a butler as a free man is somewhat on the nose.

Wadsworth is the butler from the original “Clue” movie. Yes, this movie was about a butler running a mansion who then had to deal with murders in the mansion. You might now know him from the popular Clue board games, where he gives players clues to solve the murder.

However, Wadsworth was much more than just your average butler in the original movie. As far as the meaning goes, Wadsworth is unique, as it means “village near the ford.” Although interesting, how this name pertains to buttling is beyond us.

Riff Raff was the ever-popular butler from the “Rocky Horror,” an extremely popular movie and musical. He’s often regarded as one of the most ghoulish, disturbed, and downright weird butlers.

Although he performed his job amicably when required, he was an alien who murdered his employer (sorry to those who haven’t seen this fantastic movie). Quite fittingly, Riff Raff is a term used for disreputable persons, or in other words, crooks.

“Hart to Hart” was a crime and detective television series in the 1970s and 80s. Max was the butler, chauffeur, and chef to the millionaire main character, who acted as a detective.

Max often had to clean up messes his somewhat inept detective employer left behind. The name Max has Latin origins, meaning “the greatest.”

Benson Dubois was a famous butler featured on two television shows during the 1970s and 80s. He first appeared on the show “Soap” as a butler who ran the Tate household.

He then appeared in his own spinoff series, “Benson,” where he took care of the governor’s mansion. Although humor wasn’t exactly his strong suit, he did become lieutenant governor of his respective state. The meaning of Benson is “son of Ben.”

Lurch was the butler in the popular television series “The Addams Family.” Although played by various actors across the various television series spinoffs and movies, his demeanor was always the same. He was nearly seven feet tall and looked as though he had just walked through the gates of hell.

He is known for being one of the gloomiest and creepiest butlers. Although the name originates from the French word “archer,” in terms of this character, it’s often regarded as meaning “lurch around.” He always walked funny!

Emilio Lopez was the weird and quirky butler from the massively famous Adam Sandler movie, Mr. Deeds. Emilio Lopez slightly resembled a vampire, not just due to his pale complexion but also his tendency to move like a shadow and sneak up on Deeds. But, of course, Emilio was the rightful heir to the fortune that Deeds himself thought was his.

Emilio Lopez was portrayed by John Turturro. For those interested, the meaning of the name Emilio is “rival.” This is quite fitting in the Mr. Deeds movie, as he was the rival to a fortune of billions of dollars.

Besides the 12 butlers from pop culture listed above, there are plenty of others to consider.

Whether you’re just interested in famous butlers from pop culture, or you have a butler that needs naming, the 23 names we’ve gone over should be a good starting point.