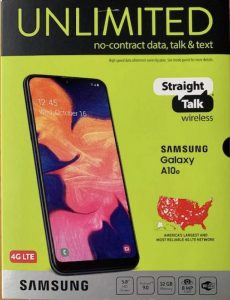 Most people in the USA prefer buying cellular smartphones that offer great packages.

But there’s a better one by the name of Straight talk that offers a shared cellular network and supports all major cellular networks, including AT&T Mobile, Sprint, T-Mobile, Verizon and others.

But what are some of the best phones that Straight talk is offering?

Find out the answer to this just below:

The Samsung Galaxy A10e is one of the amazing budget phones of Samsung and is also an outstanding straight talk phone. This is a brand new (unused) phone in the box that comes with all the requirements that are shown on the box.

The HD display of 5.8” makes it appear to be best with 2 GB RAM that prevents the phone from lacking from overuse. The battery timing on this phone is perfect according to its other specifications. Other than this, this phone only works with the straight talk phone provider.

The phone just supports GSM and has android 9 that is new and can be updated to the latest version. There’s one thing you should know, this phone would only work with the straight phone provider in your area and nothing else. Also, it contains a mobile hotspot as well.

Samsung Galaxy series was launched when the era of smartphones was introduced into the world. There were a few categories that Samsung created to cater to the market as much as possible. These are:

Samsung created the J series as an affordable range of phones in which Samsung launched Samsung Galaxy J7 Crown, which was the phone with the best specifications in the J series. The HD screen with a stunning camera that displayed amazing picture quality and video as well.

The most required thing in a straight talk phone is the good battery timings and surely the Samsung Galaxy J7 Crown does not lack behind in this and has a talk time of up to 24 hours on the clock.

Samsung always provided the products that would sell themselves in the market not only because they were the market need but also because this has become a necessity. Samsung’s flagship owner of the year 2016 the Samsung Galaxy S7 was the best phone of Samsung back in the year.

This series was created to give the best results with the best specifications. They never laid behind from any brand in providing the best product, but also were the best in providing satisfaction to the customers.

S7’s straight talk network is run on Verizon’s 4G LTE fastest towers that not only supports GSM but also has a CDMA access code. In addition to this, this set comes with the most useful and authentic things namely:

The above-mentioned items are objects that increase the product’s lifespan with maximum security and care.

iPhone being the best product of Apple is also an amazing device for a straight talk phone. The Apple iPhone 7 available here is the one that is refurbished and is one of a kind in its terms. This isn’t certified by Apple at a time but is been through a professional test from the authentic Amazon Suppliers.

This product tends to have surprisingly fine battery health and all the things in their original state. Also, the body of the phone will be perfectly fine when held in hand and the minor dents or scratches would be hidden then. It would be preferred to put on a case and a screen protector for your own good.

The charger would be included with the phone but not the original charger, but, it will be an MFi charger that is compatible with the phone and would work just fine. Last but not the least, the device comes with 90 days of exchange or refund warranty if you aren’t satisfied with it.

Samsung’s ‘S’ series being the flagship series of the brand released the successor of the Samsung Galaxy S7 that is the Samsung Galaxy S9, which was released in 2018. This phone is one of the best phones for straight talk phones as the specifications are stunning on the device.

The large screen of 5.8” fitted with the super AMOLED Capacitive Touchscreen that consists of a QUAD HD display with the corning of Gorilla Glass 5. The marvelous camera of the phone that captures an amazing picture with the best quality is sure a treat for the eyes to see.

Also, the breathtaking camera of this phone records the video in 4k quality that can be easily be streamed on the phone’s screen.

The budget phones of Samsung are also the ones that provide shocking specifications for the budget phones. The Samsung Galaxy A10s is an upgraded version of the same model that contains the second latest version of android and can be easily upgraded.

Samsung being one of the well-known brands makes astonishing phablets. Samsung Galaxy A10s is a remarkable example of straight talk phones.

If you’re a fan of the classic flip phone, you’re in for a treat. LG’s 441G is the perfect option for those that prefer simplicity and seniors that are used to typing on flip phones. Sure, the phone doesn’t has the latest technology and features, but it still offers decent functionality and is perfect for making phone calls and sending messages.

It has a 2.2-inch screen through which you can navigate the phone, take pictures, or play music. The buttons are clicky and have bold digits that are easy to see for the near-sighted. On the front, there’s a screen dedicated to displays basic information like time, signal strength, and battery. Moreover, it has Bluetooth through which you can send media or other files wirelessly to other phones.

Alcatel’s 1 SE is the perfect budget phone for people that want great performance and battery life. It comes with an octa-core processor and 4GB ram, which is enough to run multiple apps at the same time and most high-end games smoothly.

As for the cameras, the phone has a three at the back and one at the front. It comes with a 4000mAh battery, which is enough to last you a whole day without needing a recharge. The display spans 6.2-inches, and there’s a fingerprint sensor at the back for extra security and easy unlock.

The Samsung A71 5G is the perfect smartphone for people that want flagship-level specs at a mid-range price level. It has a stunning 6.7-inch AMOLED display with FHD+ resolution and a hole-punch camera at the front. The screen also has an under-display fingerprint sensor so you can unlock your phone conveniently.

Performance-wise, the phone comes with the renowned Snapdragon 765G chip and 6GB of RAM. This hardware is enough to run the latest games and handle multi-tasking without breaking a sweat.

On the back, there are four cameras, with the main sensor boasting 64MP for razor-sharp pictures. All of this topped off with a 4500mAh battery that will easily give you 8 to 10 hours of screen time on a single charge.

Now that you have went through all the product review, you must be wondering which phone would suit you best, right?

We know that straight talk phones are operated by various network carriers that have done partnership with many mobile operator companies. They also provide packages for messages and calls like other networks too.

But which phone is really for you? How does straight talk really work? And how should you choose a phone which suits you best?

Let’s find out below:

What phones do straight talk provides

Straight talk provides a limited number of phones that are under-budget and mostly run android. They include some usual Apple products as well but the Samsung devices can be bought new and with easy payment plans.

How to know if your phone is compatible

You don’t need to purchase a phone from straight talk because you can easily use your existing phone if it’s compatible. The compatibility can be checked from straight talk’s website, although they are providing both the main providers so your phone can work.

After this, you need to check the compatibility of your phone that which parenting networks the phone would be best suitable for. Once you know it from the straight talk customer care, you can get your new sim and activate your phone to enjoy calls, messages, and internet.

After getting your phone from the straight talk and deciding to change it to another carrier would require you to unlock the phone from straight talk. There’s no hazard in this, it all depends on what device you are using and want to get unlocked.

A call to the customer care department of straight talk would be a solution as they would provide you the key to unlock it.

For knowing the coverage, you need to have your phone and your sim card. It’s necessary to check all of the maps to see if your phone will receive signals from your desired network. If you are coming from another carrier, it needs to be checked because straight talk may have different networks.

After you have checked whether your phone has coverage in the specific region, you can go ahead and get a new sim card from straight talk.

Are straight talk phones any good?

Straight talk phones are a perfect choice if you need fine network coverage and want to save money. They provide reliable and economic prepaid plans. They make the fine use of Verizon, AT&T, and T-Mobile.

What phones can I use with straight talk?

Straight talk phones include GSM unlocked phones with compatibility in AT&T, T-Mobile, Sprint, and some other phones that have CDMA technology compatibility as well.

The catch with straight talk wireless is the data service term which means that the ‘unlimited’ data services are not unlimited but they have a limit defined which is hard to reach.

Straight talk phones provide the most largest and most dependable coverage for all of its customers of 4G LTE. It shall transfer to 5G once the technology become available to them.

In 20 GB of data, you can easily browse the internet for up to 240 hours a month. Not only this, but you can also stream to 4000 songs online.

Check out our other articles: