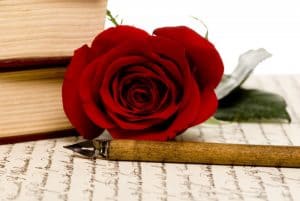 How would you define love? A feeling? A force of affection? Or maybe you have your own personalized definition of love. But, whatever your definition of love may be, there is a strong chance that it would not be completely satisfying, even for you.

However, when you read a poem, or maybe hear a song; you feel as if the poet or lyricist is talking about you. You feel that way because the writer is able to describe something that you can feel, but cannot fully comprehend or describe.

And that is exactly what great writers and poets do. He/she describe for us our most intimate and personal feelings. And reading their poems make us feel connected. Their manipulation of words and phrases gives us hope; that after all, we are not alone in our feelings and experiences.

Our list starts with “Romantics” a lovely poem that explains the love of Johannes Brahms for her friend (lover) Clara Schumann. For all of you that do not know, Brahms was a German composer. He was in love with Clara Schumann, who was a pianist and married to Brahms friend, also a composer, Robert Schumann.

Brahms love for Clara is apparent from his writings. However, there has always been a dispute between various historians on whether they acted upon their love or they kept their feelings hidden.

Lisel, quite eloquently, speaks on this matter. He explains that love is much more than just a connection between two bodies. He says that historians are forgetting that love is in how the lover speaks, how their eyes meet, how their hearts unsettle at their lover’s site.

11. When I Too Long Have Looked Upon Your Face

Next on our list is this profound sonnet written by Edna St. Vincent Millay. Edna is an American writer who was the third ever woman to win the Pulitzer Prize for Poetry in 1923.

In this sonnet, Edna describes the feeling she feels when she sees her lover. She describes how his bright glow is just too bright for her to handle. She compares it to seeing the sun for too long; leaving her dazzled and with a hazy sight.

However, the tone of the sonnet changes in the last six lines. Here the poet describes what she feels when she is alone. She paints her life as a narrow room. She lives a gloomy life. Everyday things seem strange but then she observes and eventually gets accustomed to the darkness of her life.

A careful contemplation would render us the idea the poet may want to convey. That is, the only light in our otherwise dark and sad lives is love.

Pablo Neruda is regarded as one of the most important Latin American poets of the 20th century. Although Neruda has written on a variety of themes including surrealist poems, historical epics, and overtly political manifestos; he had a particular knack for describing the experience of love.

Pablo’s Love Sonnet XI is one of these love poems that describe a lover’s desperation for his/her lover. He describes how no worldly drink can quench a lover’s thirst, no worldly food can save a lover from starving.

A true lover only craves the sight and closeness of her lover. In Pablo’ own words:

William Shakespeare needs no introduction. And all those familiar with his works know that his use of the English language is rather unique. In Sonnet 116, Shakespeare distinguishes real love from a crush or an infatuation.

He declares that love is something that is not altered by time or distance. Love remains constant, no matter how apart you live. And if you feel that love is fading over time; that is not love but something else. For love is eternal.

Shakespeare does not take his claim lightly. He depicts the graveness and authenticity of his claim in the last two lines of his sonnet:

William Butler Yeats is an Irish poet. His poem “When you are Old” describes that love is not about looks in an exquisite manner.

At the start, the poet addresses her lover. He tells her that when she is old, her face full of wrinkles and her eyes full of sleep; she should pick up his book (the book of the poet’s collected poems). This would remind her of her glowing eyes, her youthful energy, and her grace.

This remembrance would make her wonder how many fell in love with these looks that eventually faded. However, there was one (the poet himself) that truly loved her, even the wrinkles of her old age. His love was not physical but spiritual.

But it would be too long. Because, by then, the poet would be dead; wandering around the hilltops or in the sky, among the stars.

An interpretation of the poem is that the poet intends to warn her love about the people that will only love her for her looks. And that these people will eventually leave her when wrinkles will surround her face. And she will be left alone with her regrets.

Rabindranath Tagore was a poet and artist from the Indian subcontinent. Tagore has been known to play with the concept of time in his writings. His understanding of time is different from that from the generic definition.

In his poem “Unending Love”, he again plays with the concept of time to describe love. He uses expressions such as “life after life” and “age after age”. He treats love as something universal. He says that his love for his lover is not just that, but is part of a love that is endless and timeless.

The love experienced by all the lovers of the world, of the past, of the present, and the future, are parts of a more whole and universal form of love. This love is eternal. In this sense, the poet shows the reader that being a lover makes them part of a larger spectrum. A lover is a part of an eternal experience far more than one can even comprehend.

Introducing such a profound concept makes this one of the best poems on the concept of love.

This poem is of great significance because it shatters the stereotype of lovers prevalent in naive minds of the population. Carol, in her poem, admits that she is not going to sugarcoat it and reveal the harsh truth:

She portrays love as an onion, something that has many folds, several dimensions. Love is not about beautiful flowers, valentine cards, or cute kisses. It is possessive because it is faithful. It will remain as long as you live, and more.

In a sense, Carol is trying to warn the readers not to take love lightly. It is a matter of great significance and seriousness. Love is not your high school romance. It is something more profound and far-reaching.

Kahlil Gibran was a Lebanese-American writer who spent most of his life in the United States. Khalil is one of those writers and poets that could describe love in its most fundamental and true sense.

The poem advises its readers that love is not something to hold on to. Your lover is not your asset. Do not bind your lover. Do not constrain him/her. Be free and joyous and let the other be free and joyous.

The idea of individual privacy is prevalent in this marvelous piece of art. Khalil asks the lovers to love one another but do not chain them, for love is not something to be contained in a cup but a river that flows through each soul.

Love, dance, and enjoy but do not hold each other. As Khalil writes:

Edgar Allan Poe was a famous English writer mainly known for his poems and short stories. Poe had a Gothic approach to his writing. He mainly wrote on the concept of death and mourning. Critics categorize his poems in the genre of dark romanticism.

A great example of this his most famous poems “Annabel Lee.” Poe, like in many of his poems, chooses a narrative style of writing. He narrates the tale of his lover Annabel Lee who is a maiden in a palace situated by a river.

One cold night, due to the cold harsh wind, Annabel dies. Poe blames the death of her lover on the Angels above. According to Poe, the Angels were jealous of their love and so-called upon the harsh cold wind that killed Annabel Lee.

But there love, even in such a naive age, was way powerful that even death couldn’t part them. For as Poe proclaims, there is no night in which he doesn’t dream of her. And his nights are spent, laying down beside her lover’s tomb.

Another great addition to the world of poems about love and its manifestations. The poem describes the unity of everything. Percy argues that everything is connected to something. Nothing in this universe is separate.

The fountains join the rivers. The rivers dance with the oceans. The mountains are connected with the sky. Percy argues that everything should be united according to the law of the divine.

From this argument, Percy then questions her own solitude. When everything is connected why is she not together with her lover? When the winds kiss the trees, why can’t she kiss her lover?

2. I carry your heart

This poem of Cummings is an exemplary work of art. The poet describes the feelings of a lover. It is elaborated with such eloquence that a lover wants nothing except her loved one. His world is limited to his lover.

Elizabeth Barrett Browning was an English poet whose works inspired many great writers including Edgar Allen Poe. Her poem “How do I Love Thee?” is one of the greatest poems ever written on the topic of love.

In this literary piece, Elizabeth portrays her dedication to love. She proclaims that she reaches her mortal limits in expressing her love. She loves as much as she can, in all the ways that are humanly popular.

She loves regardless of day and night. As is evident from the last lines of this poem, the poet even wants to transcend human limits in expressing her love:

That concludes our list of the greatest love poems ever written. Although this list is not all-inclusive, it is based upon popular consensus and some personal bias. After all, art is subjective in nature and not all art forms connect with each reader in the same way.

If your favorite love poem is missing from this list, do let us know in the comments section. Love all!