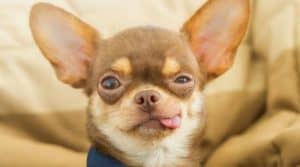 There are many dogs out there that possess different shades and colors for their coat, but there is a touch of sincerity if you decide to adopt one of our little brunette friends. The brown color is considered neutral and stimulates a sense of strength and solidity. Pretty much our earth which is generally correlated to resilience, dependability, and safety, these little chocolate-colored companions often emit an aura that may help determine your mood for the rest of your day.

We summed up a list of small brown dog breeds that may help you choose your lifetime companion.

One of the smallest breeds in the world that originated in Mexico, the Chihuahua, is named after the Mexican state, Chihuahua. They have very smooth hair and at times have a long coat. They usually weigh around 3-6 lbs and have a life span of 10-18 years. Chihuahuas are usually confident and bold. They are also very alert in nature and are very good watchdogs. This breed also loves attention and is very considerate to novice or first-time pet owners.

This breed is conceivably one of the most popular types of Spaniel breeds. Originating in the United Kingdom, it was known to be a hunting companion flushing small birds. They have naturally floppy ears, a long back, and super cute circular eyes, which express their gentleness to their family. The Cavalier King Cocker Spaniel would also be a great choice for people who have active lifestyles. They love hiking, running, and any dog sport where they can showcase their agility.

They are known as dogs that have a very big spirit trapped in a small body. The Scottish Terrier, popularly called “Scottie” was originally bred to assist farmers with their vermin problems. They were made to follow prey that does burrowing, such as foxes, vermin, and badgers. Their weight ranges from 18-22 lbs and has a life expectancy of 11-13 years. Their coat is more on the darker side of brown. The Scottish Terrier is smart and is very easy to train. When trained well, they are very independent and are not much attention seekers from their owners. They are also feisty and alert in nature.

This breed may come in a variety of colors, but the brown-coated ones are the most common. They weigh around 9-16 lbs and have a life of 10-16 years. Shih Tzu has one of the softest fluffy hairs a dog can have. Their coat has 2 layers. The outer coat is the one that can expand quite long, which is silky and very fine. And the inner coat is the feathery and soft one. These dogs are known to be very affectionate, outgoing, and generally a happy breed. They make great house dogs even if their owners have different types of animals since they are naturally a friendly breed.

One of the companion dogs that has a long history, the French Bulldog. It is hard to miss one of them due to their distinctive features, such as having naturally batted ears and that flat face. They sport a very muscular and compact body that weighs from 16-28 lbs. Their hair is smooth and very short, and that it is so fine that it is not that difficult to manage. “Frenchies” are a bit quirky and playful. They are a very affectionate breed and are great with families with children. They can easily get along with other pets in the household once introduced properly. And if you are an apartment dweller, the good thing about them is that they rarely bark.

The Shiba Inu is an ancient breed hailing from the land of the rising sun. They were primarily bred for hunting. They were made to flush birds and for small games. Their fur is double-coated and is very thick. They usually come with a brownish to a lightly honey-colored coat with a white underbelly. Due to its hunting nature, this breed is known to be an alert and fearless breed. He is very confident, strong-willed, and most of the time, can live his days independently. Shiba Inus are known to be very affectionate to their owners but are a bit indifferent to strangers.

More famously known as the Monkey terrier due to their facial expression that is so distinct, they were originally bred to get rid of rodents in the granaries and stables. They have a small and stout body covered by a thick brown coat that is wiry. They usually weigh from 6.5-13.2 lbs and have a life expectancy of 12-14 years. This wiry-coated breed is very intelligent and can easily adapt to an environment given to them. They are friendly towards kids and can be trained easily. But they are not good with small pets since they were originally bred to hunt rodents.

They are widely recognized as the “Weiner dog.” This breed has an elongated and stout body where they got their name from. Their coat comes in a variety of colors, but the most common are different shades of brown. Their short and dense hair gives them a leathery look. Dachshunds are hounds that are made for hunting burrowing animals, making them brave and fearless in nature. They are also very curious, clever, and lively, making them a great fit for owners with active lifestyles.

With the breed name itself, you can easily identify that this breed is hailing from Cuba. The Havanese is a small dog of great charms. They weighed around 7-13 lbs and had won a lot of admirers through their coat. Havanese commonly have long and very silky hair combined with expressive circularly shaped eyes. They are also famous for being a “Velcro dog” since they tend to keep themselves very close to their family’s side. These dogs show immense loyalty to their owner and are generally great with other pets with proper introduction.

The biggest and one of the cutest in this list, the English Cocker Spaniel, usually weighs 29-32 lbs. They have a lifespan of 12-14 years. They have brown silky hair, which is flat-lying on the top and has a very soft undercoat beneath. Additionally, the English Cocker Spaniel are generally playful, friendly, and known to be very gentle. So having them with children is not a problem if the kids were brought up with them. Their gentleness and friendly nature mean that they tend to be easygoing and would not be considered good watchdogs.

There you go, the best 10 small dog breeds (brown) on our list. Please note that many dogs have brown coats on them, but these are the most popular among the bunch. If you have wanted to get a furry companion of your own, you will definitely have an easier time coming up with a decision. Hopefully, our list was able to help you in expanding your knowledge with small dogs that have brown fur.